Save Indonesia With Sharī‘Ah and KhilāFah: A Study on the Collective Action Frame of Hizbut Tahrir Indonesia

This paper outlines collective action frame, i.e., action-oriented sets of beliefs and meanings that inspire and legitimate the activities and campaigns, of of Hizbut Tahrir Indonesia. Since the outbreak of economic crises in 1997, HT activists began to perceive that structurally based problems were existed which included economic injustice, moral decay, and political instability. This was, in turn, an entry point for HTI activists to voice that the secular-positive law has not brought about socio-cultural, legal, and political improvements for Muslims. Thus, they proposed that the root of the problem laid in the secularism and capitalism adopted by the state. They rejected democracy and nationalism as the solution to ameliorate the problem simply because the two concepts are alien to Islam and they treated these political systems as merely an extension of Western imperialism. Instead, they favour sharī‘ah and khilāfah as the total and comprehensive solution. Da‘wah becomes HTI activists’ arguments to call up people to participate in the movement. Since the propagation of Islamic beliefs, ideas, and Islamic shariah at the individual, social and state levels cannot be achieved unless through organized political activities, the establishment and the participation in political party is indispensable for every single Muslim. Thus, participation in HTI as political da‘wah in forms of collective action became moral incentive for every Muslims to participate. 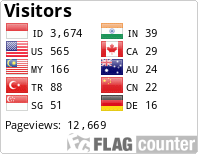 Jurnal have been indexed on